This Page was last reviewed and changed on June 8th, 2022

The UK is known as the cocaine capital of Europe, with a reported 873,000 taking the drug in 2020. Cocaine dependence impacts the lives of millions across the globe but disguised as a substance for the wealthy, the hard reality of cocaine addiction can go unnoticed.

If you are concerned for yourself or a loved one, read on to learn the signs and symptoms of cocaine addiction, its effects on physical and mental health, and how to get support. 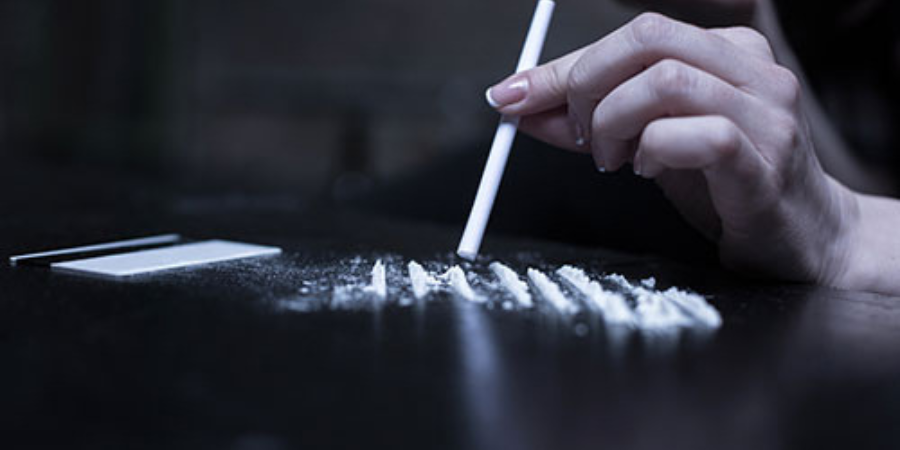 Cocaine is a white powder derived from the leaves of the coca plant. A powerful central nervous system stimulant that is usually sniffed up the nose, it increases levels of the neurotransmitter to increase dopamine levels in the brain. It also goes by the names of coke, charlie, snow and powder.

The effects of cocaine

The effects of cocaine are immediate and include feelings of euphoria, increased alertness and talkativeness. The positive effects are short-lived and can last anywhere from a few minutes to an hour, depending on the dose and the tolerance of the user. This can quickly lead to cocaine addiction as users feel encouraged to repeatedly take cocaine to maintain the euphoric effects.

Cocaine can also make the user feel anxious and create feelings of paranoia.

How does cocaine addiction develop?

Contrary to popular belief, addiction doesn’t stem from dangerous substances. Addiction develops when drugs such as cocaine are used as a coping mechanism for unresolved issues such as trauma or grief.

Just like comfort eating or obsessive gaming, the effects of cocaine are used to escape the reality that you may not be ready to face. Some people can take cocaine multiple times without developing addiction, whereas others can become addicted after trying it once.

Cocaine addiction is diagnosed when you are unable to stop taking it, even if you want to, as to do so will cause physical withdrawal symptoms or mental insecurity.
Examples of withdrawal symptoms when you stop taking the drug include anxiety, irritability and depression. Unfortunately, cocaine addiction can go unnoticed, as most people with addiction will be in denial that they are using cocaine as an escape and convince themselves that they can stop at any time. 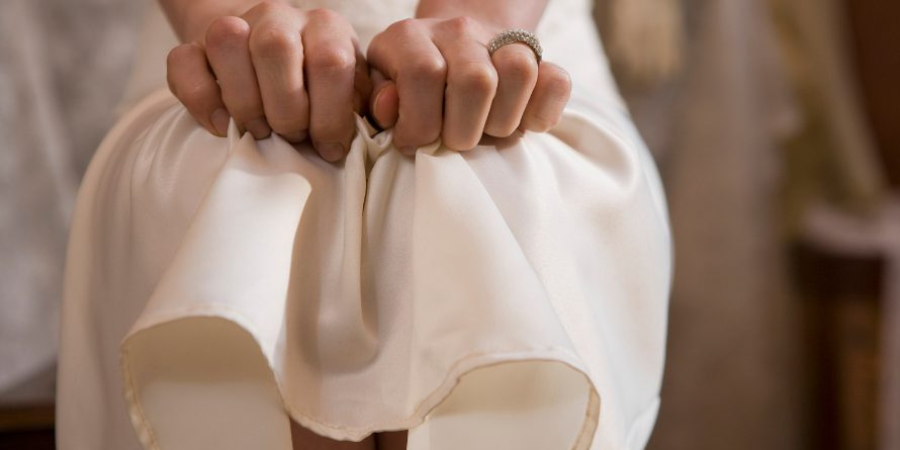 Am I addicted to cocaine?

If you’re worried that you or someone you know may be addicted to cocaine, here are some questions to ask yourself:

If you have answered yes to any of these questions, you may be exhibiting signs of cocaine addiction, so it is important to seek immediate help.

Signs and symptoms of cocaine abuse

Cocaine abuse not only has a detrimental impact on your health and wellbeing but can also lead to addiction. Knowing how to spot cocaine abuse in your loved ones ensures that you can help them get the treatment they need as soon as possible. If you are worried that someone you know may be using, here are some of the signs of cocaine use to look out for:

These potential cocaine symptoms can also be signs of other conditions or illnesses, so it’s important not to jump to conclusions before addressing your concerns. If in doubt, speak to addiction or medical professionals as they will be able to give you further guidance. 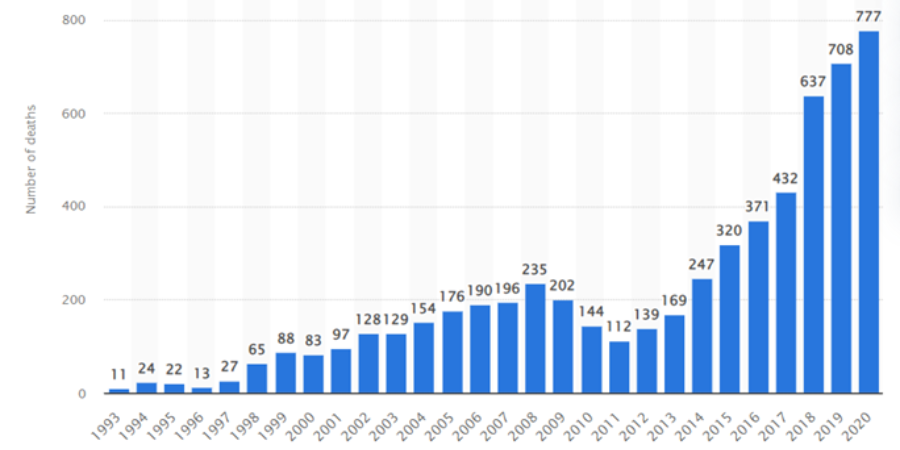 Cocaine use can cause serious damage to physical health, affecting the heart, brain and other organs. It can also lead to long-term psychological and mental health problems such as chronic anxiety, depression and paranoia.

In 2020 alone, there were 777 cases of death by cocaine poisoning in England and Wales. These are the highest numbers since 1993, despite the Covid-19 Pandemic making access to cocaine more difficult.

To increase profits, cocaine is often mixed with cheaper substances such as corn starch, talcum powder or baking soda to bulk out the product. These additions can cause serious health problems, including heart attacks and strokes, and it’s not possible to tell by looking if the cocaine you purchase is pure.

While cocaine can give you a short-lived feeling of euphoria, this experience can be coupled with vertigo, tremors and muscle twitches. Cocaine use can also lead to erratic and dangerous behaviour, which can result in unwanted injuries and life-threatening incidents.

Cocaine is associated with a range of serious health problems, including heart attacks, strokes, seizures and organ damage. Regular cocaine use also can lead to chronic anxiety, depression and paranoia, which can result in increased cases of violence, domestic violence and suicide.

As one of the most expensive illicit drugs available, extensive cocaine abuse and addiction can also lead to serious financial issues and drug-related crime.

According to statista.com, the street price of a gram of cocaine in the UK was almost £100 in 2019, and prices have increased in the subsequent years due to high demand and the Pandemic’s effect on supply.

One London-based drug dealer told Sky News that the price of a kilo of cocaine had risen almost 10%, from £36,000 to £40,000, with these costs being passed onto customers.

If you develop cocaine addiction, you can end up spending large amounts of money on the drug, leading to debt and financial problems. Addiction can be so consuming that some people resort to criminal behaviour such as theft, violence and prostitution in order to get money to buy more cocaine. 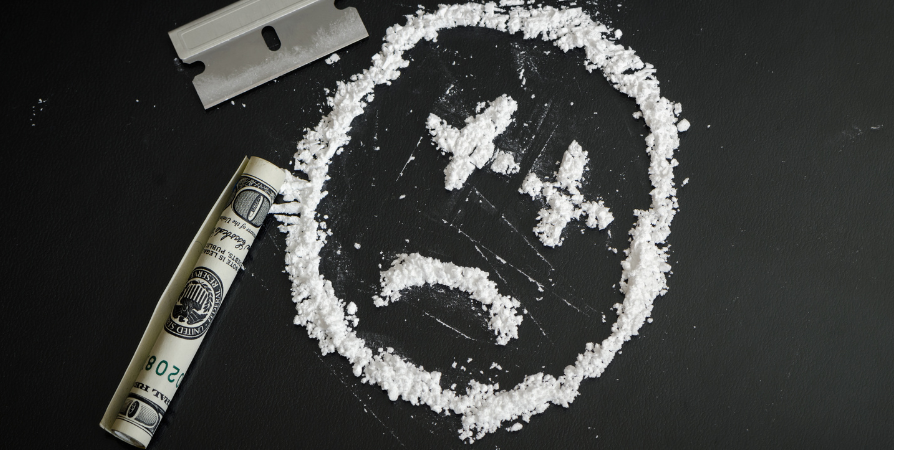 Cocaine use in the UK

While cocaine has historically been viewed as a drug for the wealthy, this is no longer the reality.

According to the National Institute on Drug Abuse, cocaine use has increased among all UK income levels in recent years, and people take it for a number of different reasons.

Some use it recreationally to enjoy the short-term effects, while for others, cocaine is used as a way to cope with difficult situations or as a means of self-medication to deal with mental health problems such as anxiety or depression.

How is cocaine addiction treated?

There are three stages to overcoming cocaine addiction and abuse. The first is recognising you have an addiction, which is an enormous achievement. The second and third stages are detox and rehab, which you can read more about below.

If you think you may be addicted to cocaine, it is important to get support as soon as possible.

When you are ready to seek help, please call our friendly admissions team so you can take the first step in overcoming cocaine addiction and taking control of your life.

Nobody can be forced to get help, so if you are worried about someone’s cocaine use, contact us to find out more about Cocaine rehab and Cocaine detox.

What are the side effects of cocaine?
Side effects of cocaine include feelings of euphoria, increased alertness, talkativeness, paranoia and feelings of anxiousness. Long term use can lead to heart attacks, strokes, seizures and organ damage, and in some cases, depression and chronic anxiety.
What are the signs of cocaine addiction?
Although the signs of cocaine addiction are difficult to spot, the biggest warning signs are taking larger volumes of the drug in order to experience a high, and being unable to stop taking cocaine due to physical withdrawal or anxiety.
Other signs include lying to people about your cocaine use, a loss of interest in activities, and personal relationships being affected.
How do you treat cocaine addiction?
Cocaine addiction can only be treated by identifying the root causes of the addiction and practising healthy coping mechanisms to deal with cravings. This is achieved at a rehabilitation centre, where you will also detox from cocaine safely before starting your programme.
Find help for Cocaine addiction
FAQ
Our brand promise